Well, it’s over. A fantastic 60th year of the Cannes Lions Festival of Creativity and this year we can crown the first AdParlor Cannes Pride Top 100.

These 100 individuals have fended off competition from the other 24,337 glittering conversationalists talking, on Twitter, about Cannes Lions to demonstrate their digital influence and leadership.

About the Cannes Pride

While many Top 100 lists can be found on the internet, Cannes Pride is different: this is not a subjective list of “top influencers” curated by an individual, nor is it a generalized  system for measuring general social media influence and trying to apply that to a specific community.

No, instead it is a hybrid of the two. It has been devised by a Cannes Lions participant (Simon Baptist) and sponsored by a Cannes Lion sponsor (AdParlor) using real metrics and weighting as devised in accordance with the digital leader culture at Cannes. Using my web application Leaderboarded to crunch the data and generate the leaderboards meant that the task of creating a bespoke ranking system, one that would usually take a team of data scientists and engineers working round the clock, was completed automatically every day by the system without any fuss.

The Pride, the Top 100 are digital leaders and influencers at Cannes Lions. In a very noisy festival being able to influence the conversation as an individual lion using Twitter shows a real ability to connect with the wider Twitter audience.

While no one player managed the best possible score of 100, many came close. To succeed you had to discuss (and be retweeted on) #CannesLions, have a good overall PeerIndex social influence score and to be active in promoting and discussing CannesPride itself (worth a secret 3% of the score but enough to have been worth doing for the top players). You’ll know for next year.

Next year we’ll be back with ranking based on more digital channels and maybe some physical ones too. Thanks to all the Pride and we look forward to seeing your influence grow, not least because you’re showing everyone your Cannes Pride badge!

Day One of Cannes Pride – the AdParlor Top 100 digital leaders at the Cannes Lions annual advertising awards, got off to a bang with some heavy hitters dominating at the top of the leaderboard.

In runners up we had Miguel Ruiz from Ogilvy Mexico, Jonathan Mildenhall from Coke, John Maeda from RISD (Rhode Island School of Design), and Hector Fernandez who is also from Mexico, Publicis this time. 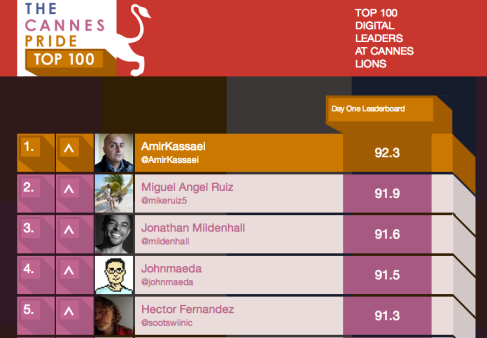 Looking into the details this is how Amir got his 92.8 score:

PeerIndex score of 55, 13 tweets that were retweeted 63 times and 84 conversations about Cannes Lions.

There are actually 10,000 people on the leaderboard so if you’ve tweeted on the #CannesLions hashtag you can go and find your position. Head over to https://www.leaderboarded.com/player/signin/1955 and sign in with your Twitter account to review your rank and see your own stats.

Every Day is a new leaderboard so you’ve always got a chance to get to the top – Amir got there with just 13 tweets – it’s not about quantity its about quality, relevance and reach!

If you’ve got a company Twitter account you won’t be able to play – we’re manually excluding all the companies who enter – this means we can cut through the noise to see the signal – who are the real individual digital leaders at Cannes.

Social Data, the data we get on our customers via their public (and occasionally private) social media profiles remains a largely untapped resource by enterprises of all sizes.

Interesting companies in this space include:

Who have I missed out? Let me know in the comments below.

Or come to one of my Social Data meetup.

Good to be back in Social.